Helping you to take steps to a safer and healthier environment!

Display Screen Equipment (DSE) is a device or equipment that has an alphanumeric or graphic display screen, regardless of the display process involved; it includes both conventional display screens and those used in emerging technologies such as laptops, touch-screens and other similar devices.

Do you use this type of device/equipment?

Computer workstations or equipment can be associated with neck, shoulder, back or arm pain, as well as with fatigue and eyestrain.

Surveys have found that a high proportion of DSE workers report aches, pains or eye discomfort. These aches and pains are sometimes called upper limb disorders (ULDs), which can include a range of medical conditions such as RSI. Most of these conditions do not indicate any serious ill health, but it makes sense to avoid them as far as possible. 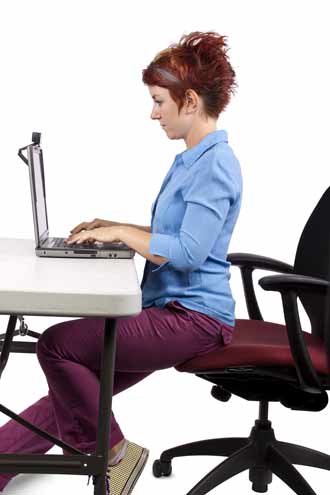 The Health and Safety (Display Screen Equipment) Regulations 1992 aim to protect the health of people who work with DSE. The Regulations were introduced because DSE has become one of the most common kinds of work equipment.

That doesn't mean that DSE work is risky – it isn't. ULDs can be avoided if users follow effective practice, set up their workstations properly and take breaks during prolonged use. By just taking a few simple precautions, work with DSE can be more comfortable and productive.